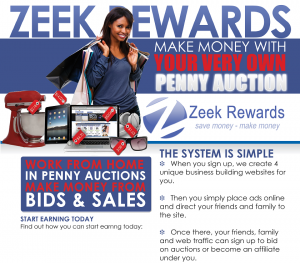 Is Zeek Rewards a scam? – An overview of the system

The business of Zeek Rewards stems from affiliate marketing where people signing up as its affiliates will enjoy a two tier income source, one from direct selling and the other through the commission taken from the earnings of the members they recruited. This provides many an opportunity to earn an income even while working at home. The system basically offers a rewards program to its members through Zeekler’s penny auction site where one can bid to purchase items. The last person making the bid will win the auction. Many people were tricked into bidding at the auctions, probably because of the enticing but deceiving way of marketing the system to the public.

During the first few years of its operation the Zeek Rewards became popular across the globe but it is only a matter of time before many people start to realize that they are being fooled out of their money and that the anomalous patterns on how the system works become apparent. Suspicions became stronger that this is another PONZI scam when there appears to be ridiculously amount of bids coming from one person only which is found to be a bidding bot being used in the system.

The fall of the Zeek Rewards – Unmasking its unscrupulous system

Basically the existence of Zeek Rewards is providing its members an opportunity to earn rewards by buying some securities. How the system earns rely heavily on its large affiliate network that earns its members commissions. However, the anomalous pattern was exposed when some members became suspicious on the flawed system and some ethical issues and concerns which the SEC investigated. Many of its members also began questioning the validity of the securities sold to them. There is also questionable system on how the profit sharing scheme works. It has become apparent that the affiliates are being rewarded not based on the efforts they put on working for the system but based on how much money you put into the system. This became apparent when the Zeek Rewards allow people with large balance in their account to withdraw while those with low balance are encouraged not to withdraw their money. It is also becoming apparent that the Zeek Reward is a form of investment although the management consistently insisted it is not. There are so many inconsistencies in their policy as well.

The SEC investigation led to the findings that the Zeek Rewards is a huge pyramid scam, another PONZI system that scammed a large number of people who invested a significant amount with the program hoping to build a good business from it. Over 1 million people were scammed by Zeek Rewards involving more than 600 million worth of investments. In 2016, Zeek Rewards former president Paul Burks faced trial before a jury for more than $900 million scam. Among the known owners of the program are Alex deBrantes Paul Burks, Darryl Douglas and Dawn Wright-Olivares.

A note of warning

The Zeek Rewards currently ceases its operation after the SEC shut it down, however there is a chance that there are other programs that are following the patterns of Zeek Rewards to scam people out of their money. Some may manifest a slight version of its characteristics and income generating schemes. Most of these scams target affiliate marketers and people within the multi-level marketing community.

Now we have a definite answer to the common question is Zeek Rewards a scam? With the SEC closing the company down with its CEO facing an indictment for million dollars worth of scam, the Zeek Rewards is definitely a POZI scam. With the way the system works, it is obvious that it is after the money of its affiliates and do not base their earnings according to their work. Considering the controversy involving the Zeek Rewards, it is always best to become more aware about the other affiliate programs that are being offered as a money making scheme. It is always best to make your own research and take the time to understand and even challenge how a particular system works to ensure that you are making a good and safe investment.

IS INSTANT REWARDS NETWORK A SCAM? – NOTHING IS INSTANT

IS MY TIME REWARDS A SCAM? – NUMEROUS NEGATIVE FEEDBACK

Is Get Weekly Paychecks A Scam?