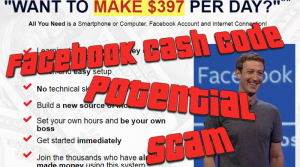 Is Facebook Cash Code a Scam? – Top reasons why it is not legit

Facebook Cash Code will offer you a kit that you can use in order to earn about $397 a day. You will only have to spend at least 2 to 5 hours per day and you can actually run this kind of business without the need of any experience at all. Sounds so easy, right? While it is possible to earn this amount a day with internet marketing, the process requires your time and effort. We have not seen people getting instantly rich without doing any effort at all when managing their internet business. Again, any promise of get rich quick scheme is a red flag for scammers. Take notice of the pay checks that Facebook Cash Code users allegedly earn from its sales page. They are actually photoshopped and edited, some of which were already used in other scam sites. Some of the persons who claim to have used the product and earned so much from it are actually fictional. It is not surprising to know that their feedback and testimonial are merely lies, too. The image of the person who claims to have purchased Facebook Cash Code is also available for purchase from Shutterstock. 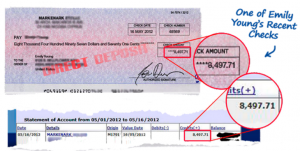 Facebook Cash Code is being marketed as a quick rich tool that can help you earn fast money by posting links on Facebook and you only need to spend very minimal time to make it work. The price of the kit being sold was initially $69.95 but was downgraded to $47. It promises the user earnings of about $397 a day but the program does not meticulously discuss the system that is used for achieving this. It only provides for three steps, namely signing up for Facebook Cash Code, work between 2 and 5 hours a day and get your pay check. You do not need any skills other than knowing how to use the computer and the internet. With all these very simple requirements you can potentially increase your earning to about $14000 per month. The problem is the program does not fully explain the process other than making this kind of claim. Moreover, the owner or developer of the Facebook Cash Code remains unanimous, thus there is no way of knowing about his expertise in internet marketing and other information that can back up his credibility on developing this kind of an internet marketing tool.

Facebook Cash Code also claims that Facebook founder Mark Zuckerberg and Microsoft founder Bill Gates team up to create this program. However, Facebook Cash Code is not in any way connected with Facebook, otherwise it could have been directly advertised on the official Facebook site, right? Moreover, there are feed images on the Facebook Cash Code website apparently to show the site visitors that many are talking about the program in social media. However, noticeable is that one of the feed image displays actually mentions Explosive Payday and not Facebook Cash Code. The same also appears on Twitter feeds shown on the website. Whatever positive feedback that may appear on the site they do not actually talk about the Facebook Cash Code itself. Moreover, the product is being marketed as a work from home job but the truth is it is actually a business opportunity than providing job to work on Facebook.

If you find the $47 a reasonable enough price to pay for the product to start your own work from home opportunity, you will probably be surprised that this price is only for a month-long trial. You will then be charged $69.95 for the succeeding months. You will probably think you missed this from the Facebook Cash Code website but you did not. There is no actual mention for the succeeding charges and the trial anywhere from the website but later on will appear on the order page.

There are many reasons to believe that Facebook Cash Code is indeed a scam. There is less substance to the quality of the program and with no explanation on how its system works. With too many red flags indicating its illegitimacy, we are compelled to answer in the affirmative if you ask is Facebook Cash Code a scam?

Is Cash Code a Scam? – Robert Allan Trying to Brainwash You

Is Facebook Millionaire System a Scam? – Avoid it For Good

Is Home Jobs Now A Scam

Is Online Web Cash a Scam?