If you have been contacted by people trying to sell you on this Daily Web Biz scam DON’T FALL FOR IT!

They Haven’t Been Featured In The News

On their website they say “as featured on:” and go on to list a  bunch of news station logos at the top of the page. This is to try to gain credibility in the minds of their visitors. Because if they have been on the news this means they are obviously well known and popular.

There is no doubt that being featured on the news would be great for any business. The problem here is that THIS IS A LIE and they have NOT been on the news. Its not that hard to prove this one. You can go to any of these news stations’ websites, Fox News, USA Today, ABC, CNN, and you won’t find a single thing about Daily Web Biz.

And if you actually enter your email address and name you are taken to another page that features a news broadcast video that is fake as well. I can’t actually prove that this is fake, but I will say that it is extremely easy to pay someone to fake a news broadcast. If you go to Fiverr.com you can find people that literally do this for a living, faking testimonials, broadcasts, and more.

And the lies don’t end there. Even the person who allegedly wrote their sales page is a fabrication. 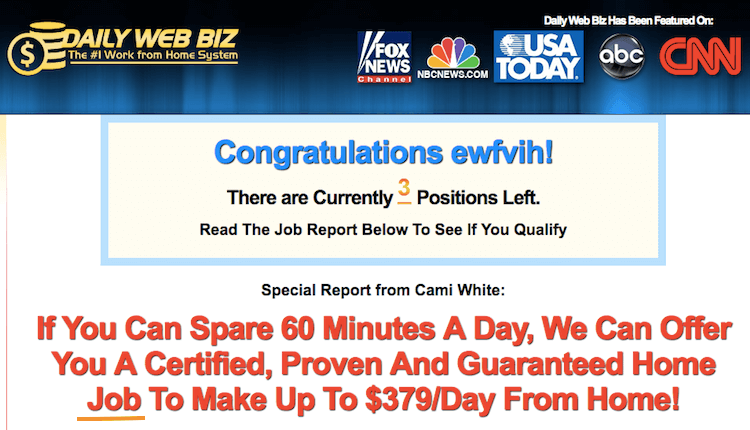 Cami White Is NOT Real! 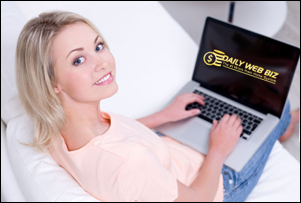 If you entered your email address and name and signed up for Daily Web Biz you would have been taken to the main sales page. This page is allegedly written by a woman who was once struggling to make ends meet, and now she makes a fortune online. Here name is “Cami White”.

The problem here is that this is all fabricated and she is NOT REAL.

Well it wasn’t difficult to find out. All you have to do was reverse image search on Google of her picture and you will found that this is not a real image, its a stock photo from ShutterStock. This means that anyone can buy this picture and use it in any way they please. And that is exactly what the scammers who created this scam did.

All they did was ad an image to this lady’s computer screen that says Daily Cash Biz to try to make it seem more legitimate. But its not.

How You Make Money With The Daily Web Biz Program

Ok, so with this program you do actually get some training. And the business model that it is built around is 100% legitimate. Its called affiliate marketing and I am very familiar with it. This is actually how I make a full-time income online.

Affiliate marketing is when you promote products for companies and get paid commission for each person you refer and make a sale from. All the big companies have affiliate programs, Apple, Microsoft, Walmart, Amazon, you name it. Its definitely a legit and great way to make money online.

But my problem is with how they lie to you about it. They make it sound like the easiest thing ever. They tell you that all you have to do is go around posting links and its just that simple. They even say that for every link you post you will get $15, which is so UNTRUE.

Based on the way they tell you that you can make money alone I would say that this place is a scam. They know darn well that you won’t be making anywhere close to $379 a day doing this. They just tell you what anyone wants to hear.. that you can make a lot of money doing just about nothing.

On top of that they lie right to your face, saying that they have been on the news when I just proved that they have not. And they lie about “Cami White” who has a fake picture and doesn’t even exist.

Is Automated Daily Income A Scam? – Actually Is Mobe

IS MILLIONAIRE SOCIETY A SCAM? – MILLIONS OF RED FLAGS