You must have been aware of the numerous scammers who are bleeding out the pockets of innocent traders who fall victims to their easy money making trading scheme. Quantum Code is simply one that falls within this category of scammers and let me tell you why. For those who are still doubtful and asking is quantum Code a scam, here are is a rundown of our findings that will help you agree that this automated trading application is a fake.

Is Quantum Code A Scam? – How it can rip off your money

Quantum Code is automated trading software that claims to have an effective system that can predict the potential earnings from trading your money. As a matter of fact, it provides a guarantee that it can turn your $250 deposit into $50,000 in a week. While this offer can be very enticing it is unfortunately unrealistic. Its marketing stints sell off the software as an effective tool in scanning and analyzing the market to find out what other traders are trading and it identifies which trading is successful. But the danger is there is a chance for the app to copy and duplicate all trades made at a time. In reality, there is no application that can actually predict the unpredictable and highly volatile system in a binary trading. Moreover, the software will allow you to place as many trades as you like until you run out of money. A professional binary bot actually provides safety features like a daily max trading limit that helps the traders to limit their losses and exercise more controls. Quantum Code does not have these features and there is no way of finding out how many trades the app can make in a day with your money.

You should also realize that your money is not in the software, but it is in the hands of unanimous brokers. Once you deposit your money there is no way of telling who has them. It could be with a purported broker but someone with no trading expertise and skills. As a matter of fact you will never know whether you money is indeed placed for trading. It is also worth pointing out that the maker of Quantum Code promotes the app as one with the ability of copying the bets made by traders at a given time but to my mind the app has no way of knowing whether these bets are placed by traders who actually know what they are doing or made by those who actually have trading skills and expertise. The software does not provide information on how they choose the traders whose bets are copied. The app does not offer a money back guarantee, which means you can say goodbye to your deposited money permanently.

The person behind Quantum Code is a fake 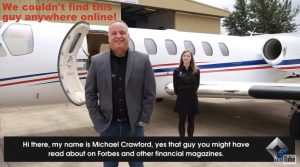 In an attempt to give potential victims the feeling that the software is legitimate, Quantum Code is marketed by a video with a person named Michael Crawford presenting himself to have been featured in Forbes magazine and other financial publications. But with further investigation we found out that the person named Michael B. Crawford who was indeed featured in Forbes is a different person than the person claiming the same name in the Quantum Code marketing video. This is considered to be an outright scam when the person behind the Quantum Code software misrepresented himself. The real Michael Crawford is the New York Time’s editor and is not in any way connected to Quantum Code. Other financial magazines also do not recognize or featured the Crawford guy in Quantum Code. Based on other reviews, the same person has been identified to be connected with other scams like the Terran Capitals.

Quantum Code gives too many offers that are obviously unrealistic and too good to be true for a prudent man to take notice. The fact that the identity of Michael Crawford is a fake you should believe that the software is a bogus one. You are likely to be scammed out of your hard earned money because there is no way for you to tell where you money goes, whether it was indeed used for trading and who trades them for you and there is no money back guarantee that you can rely on. The trading system that Quantum Code presents to its users is poorly designed, too and it is contrary to the basic rule of trading where the system is unpredictable and highly volatile. If you are still doubting and asking is Quantum Code a scam these findings will tell you it is. By exercising prudence in considering the red flags that the app is a fake you will certainly know there are too many flaws from its systems and its illegitimacy is backed up by the fake personality and false claims behind the marketing of the product.

Is Orion Code A Scam?

Is Drexel Code A Scam?

Is Virtual Income A Scam?

Is Quick Cash System A Scam