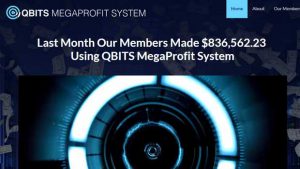 You are probably looking for the magic formula in predicting the trading market flow and the Qbits Mega Profit System seems to offer a good solution for you. You need a system support that will help you improve your profit chances when trading and its sales video appears to be enticing by telling you that you can potentially earn about $836,562.23 as profit by using its system. But before you get enticed to signing up it is best to ask is Qbits Mega Profit System a scam? Here’s what we found out.

Qbits Mega Profit System claims to be using a quantum technology that works about 3,600 times faster than any super computers out there. This capability of their system can generate about 97.5% accuracy in predicting the trading market flow. As a result, it can help generate huge or mega profit to its users which is equivalent to around $1000 to $60,000 each month. This sounds quite a good deal. Moreover, the system brags about how quick its software can generate its calculation on the market movement and open trades. In just two milliseconds you can actually get an automatic prediction on the market flow when trading. These sales pitch make the software very impressive, however it sounds too good to be true.

What can Qbits Mega Profit System do?

You are probably wondering about the “best features” from the software. Apparently, the product is marketed as a technology that can analyze charts, trends and fluctuations in the trading market. Using its own proprietary algorithm the software predicts the specific patterns in the market flow. Based on its analysis the software will signal the user of the product whether it is the best time to make a trade by determining when will be the most profitable time for you when making a trade.  The system consists of analytic software that is powerful enough to generate trading market prediction quickly and is deemed useful for traders who want to maximize their trading profits. The system is based on the web thus anyone using it need not download any application or software in order to use it. 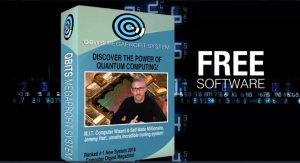 The marketing sales pitch of the product sounds too good to be true but anyone can easily be impressed on how the software works using its state of the art quantum technology.  But digging further you will soon learn that there are some dubious things about the Qbits Mega Profit System. First, the supposedly owner of the system, Jeremy Hart is non-existent. Many tried finding him in Google but with negative results. With a thought to ponder on, for someone claiming to be the owner of big time trading software he remains anonymous online. There is a good reason to suspect that the people behind the Qbits Mega Profit System have something to hide. For serious business people who want to show goodwill in their products they are willing to reveal their true identity to boost the credibility and legitimacy of their products instead of hiding on an alias.

There is also a chance that the system might be a scam. The marketing strategy for the products employs pressure tactics that will entice you to sign up immediately based on the urgency of their sales pitch. Bogus products usually employ this scheme to hurry you from signing up. Legit business does not do this considering that they are likely to thrive in the market for a long time. It is a red flag whenever a pressure tactic is employed such as showing only limited number of slots left to join the system. Visit this again few days or weeks after and you will find out that they have the same slots available still.

Another issue is the accuracy claimed by Qbits Mega Profit System on its software. 97.5% is a very high rate which not practical and realistic at the moment considering how volatile the trading market is. The majority of legitimate trading apps have a realistic accuracy between 83% and 85% but not any higher than this. Otherwise, there will be many Qbits Mega Profit System made millionaire traders now.

Another frivolous marketing tactic employed by the program is using fake testimonials from an actress whose services can be procured from Fiverr site. She claims to have earned $100,000 in three months by using the program. This alone taints the credibility of the system not to mention the poor customer service it provides when asked to show proof how they come up with their algorithm in predicting the trading market.

There is no doubt that my answer when asked is Qbits Mega Profit System a scam? is yes it is. While the program is very impressive on its performance in predicting the trading market, their claims are too good to be true, unrealistic and full of faulty claims. The product does not even explain how its quantum technology works in making its prediction. It is best to stay away from this product.

IS 1K DAILY PROFIT A SCAM? – Seem Like Mission Impossible

Is The Free Money System a Scam? – Nothing is Free