If you are one of the many people who are searching for the best opportunity to earn an income the easy way, you will probably find the offer Phoenix Power Rising promising. It appears convincing that you can earn an income by using its system to discover a unique income opportunity that can possibly change your life for the better. Before you start imagining yourself as a recipient of the system’s alleged proven technique of making a compensation plan that works, you should first ask is Phoenix Power Rising a scam?

Just like other money making opportunity offers on the web, the Phoenix Power Rising harnesses the power of video sales pitch that will entice potential subscribers to sign up for its system. From its sales video uploaded in YouTube (very convenient for a company that claims to know an effective way of earning an income to advertise their system, but cannot afford to make their own sales video that can enhance their legitimacy and professional reputation), you will be given several sales pitch. Among these are the possible big cycling commissions that you can earn and the promise of using a state of the art automated system. The offer of the company is actually confusing since it is boldly claiming that its associates (that’s how they call their members) will earn an income using its system but there is actually no specific product involved when you sign up for its matrix program.

Moreover, its Pay It Forward System provides that an associate gets an income by enrolling someone on their team and they get to earn a certain amount from the funds of new recruits. This scheme is something like a multilevel marketing approach. Thus, the Phoenix Power Rising is more of like an MLM system where the earnings of its so-called associates are actually derived from their recruits. The earnings they claim are actually taken as a commission from the new signups of their recruits. The matrix program is completed upon recruiting the required number of people required to that you can funnel into a higher matrix level with the option of investing more to enable you to have an opportunity for bigger returns.

In order to enjoy the potential income opportunity, one has to buy the Matrix Level 1 from Phoenix Power Rising at a cost of $120. In order to get an income of $300 from your investment you should fill the rows that are below your level of leader position. Other Matrix programs consist of a fee costing $500 for Matrix 2 that gives a payout of $1500 once you completed the rows on your leader position level, and $2,000 for Matrix 3 which gives a payout of $7,500.

A look at the company’s background

The Phoenix Power Rising is owned by Terri Petty. Its history showed that the program was closed in 2012, just a few months after it was launched in the same year. Reports have it that it closed due to the lack of members participating in the program. Its claim on promised income opportunity to its members is making $850 in every $100 worth of investment. The same program is now re-launched with a more modest return of investment of 300% as compared to the 850% ROI in 2012. The same scheme involving the Pay It Forward system was implemented by its earlier program which undeniably does not work. The members of the program will enjoy the income as long as more people are being recruited to join the system. However, this type of source of income does not last long because it is simply not sustainable. Nothing else in the system will generate an income for you except from getting new recruits. 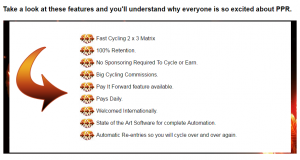 There is a good reason to give the answer to queries is Phoenix Power Rising a scam that it is just another MLM scam that offers an earn money quick system but it is not sustainable with no assurance that you can possibly recruit more people to join to recoup your investment. This is the precise reason why its first launching in 2012 collapsed and did not work as a reasonable investment to make.

Is Amway A Scam? – Run The Other Way

Is Get Weekly Paychecks A Scam?

Is Push Button Profits A Scam?