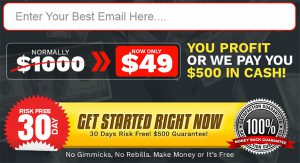 It is always an aspiration for many to finally become debt free and enjoy an income flow that they can obtain by doing less work and time with the convenience of working from home. For some fortunate internet marketers this is doable but it entails strategies in internet marketing. Many companies are offering the easiest way of earning money from home and one of them is the Money Academy. It offers an opportunity to earn for a fee and promises this kind of way of earning money from home. You are probably wondering is the Money Academy a scam? before giving it a try. Learn what we found out from this review.

The Money Academy is an online earn from home opportunity that promises you to earn some serious profitable income by selling some high end products and services. Your role is primarily to work as a middleman between the seller of the product or service to potential buyers. The Money Academy promises of helping you earn as much as $5500 for mainly introducing the products and services to others and its team will take care of making the sale from prospective buyers. It claims of providing a sustainable income and at a cost of $49 only you will discover the effective strategies of making money from home.  Its website offers a one-on-one private personal coaching that comes with your subscription with simple step by step training programs provided to help you get better payouts.

There are different issues involved in the Money Academy program that deserve some more prodding.

The program offers an earning between $1250 and $5500 within your first week of using its system or at least $500 within the first 30 days. This seems to be an unrealistic income to earn within such a given time considering the program is not too transparent on revealing how actually their system works. While it claims that using the Money Academy program you will earn fast cash it leaves its subscribers guessing how they can possibly earn from the system without providing clear information how the earnings are computed.

The Money Academy is one of the many unreliable websites that attempt to manipulate and fool their potential subscribers to sign up by publishing testimonials from their alleged successful subscribers. One of the testimonials given on the site explains how the program has helped augment income of its subscribers and it has given a sustainable income cash flow that prompted the person to quit her job. As it turns out the testimonial is fake and scripted because the person who has given her testimonial on the site is someone who offers her services to do so at a fee of $5 at Fiverr.com. Many other individuals who gave their fake testimonials are paid actors. This is a red flag that the Money Academy is engaged in pretentious and trickery activities in order to sell their products to the public and is potentially a scam.

One of the enticing offers of the Money Academy is the guarantee of $500 earnings simply by watching a video. However, there is a tricky scheme involved by following the processes required in order for you to get this guaranteed money. The first step mainly requires you to talk to a sales person. The following steps will require you to make some purchases to help you earn from using the program’s system and you need to finish the entire 21 steps within 21 days. Feedback on the internet of some who tried the program revealed that you are going to spend about $2000 by the end of the program.

Some who attempted buying the product discovered some potential difficulties in checking out their order. Upon verification on the disclosure page of the website, it becomes apparent that the Money Academy is actually MOBE which is also known as My Online Business Empire which has also a brush with scamming issues. MOBE is also flocked with negative feedbacks and complaints and when it is associated with Money Academic then it is prudent to also stay away from the program because of the shady character to which it is associated.

Is the Money Academy a scam? It certainly is. The red flags are too many and too glaring to be ignored. There are many issues already involving the credibility of the program and how the system works which gives you very good reasons to stay away from it. The program provides misleading statements and promises, not to mention the obvious trick it used in marketing the fake testimonials on their site and being associated with another program that also has a shady history of being a scam.

Is Learn How to Link Academy a Scam?

Is Push Button Profits A Scam?

Is House Sitting Academy a Scam?

Is Vibrant Money System a scam?